History of our little, old school.

In Montà, the village were we live, there are two primary schools: one is bigger and it is in the centre, the other one, where we go every day,  is smaller and it is in a hamlet called San Rocco. The school is an old building. We enjoyed looking for information in the local town hall and interviewing people that have studied in our classrooms in the past.

Here following what we have found out.

The primary school of San Rocco, a village in the municipality of Montà.The building that, still today, houses primary school children in its classrooms would boast about a century of life, in fact its construction dates back approximately to 1926.It is located next to the church of the same name dedicated to San Rocco, beyond the provincial road that connects the hamlet to the town center.

Photo n. 1 shows the place with only the church, before construction began.

Local testimonies give for certain the attendance of the school by the students of the class of 1932.In the fifties there were already two classrooms on the ground floor and two in the basement, while the rooms on the first floor were used as accommodation for teachers who came from areas far from Montà or for temporary substitutes.From that period, some inhabitants pass on the memory of the teacher Bosia (photo 2) who from the then “distant” Asti reached the Villanova station by train and then, by bicycle, the San Rocco school. It is unlikely that this teacher may have used the accommodation in the winter months or in bad weather conditions.

Photo n. 3 was taken in front of the building, on which you can see the words “Municipal schools”, at the end of the 1945-46 school year

The school was and is an important point of reference for the community of the hamlet of San Rocco and entire generations have attended its classrooms.It happens, sometimes, to still hear the phrase “My great-grandfather already came to school here”.

In the era of technology and overhead projectors, this too is a lesson in history.

Important!You’ll find pictures 1-2-3 in the following file. We did the research in Italian, of course, and then we translated it in English with the help of our teachers. We think we did a good job, involving may subljects:history, geography, English 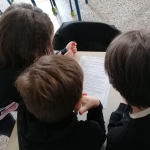 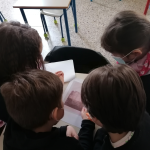 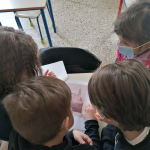 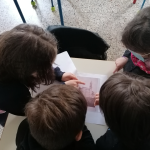 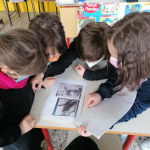